May 26, 2010
For the longest time (probably up until 6 months ago) I was a flour tortilla lover! I had switched to the whole wheat variety, but I would consistently grab the bag of flour tortillas without so much as a glance at the corn tortillas. The corn seemed dry and flavorless to me. Yes, I now know I was dead wrong.

To put this in perspective, let me share a bit about my up-bringing. I was raised in a house where, thankfully, everything was made from scratch. But don't let that throw you off. The menu never strayed far from red meat and white potatoes with an occasional nod to Italy or Germany. In fact, I can still remember being in middle school and running up against the word "jalapeno" for the first time. You won't be surprised to know, I pronounced the "j." An adult corrected me, but how was I to know? I had never seen the word, let alone the pepper!

I currently have eight jalapeno (and poblano) plants in my garden because they do so beautifully here. And meanwhile, tortillas of both varieties have become a staple in our home. I even have a tortilla press stashed in my cupboard though, sadly, it rarely gets used. (It's available for borrowing anytime!) My tastes have grown and expanded over my years as a wife/mother and I enjoy introducing my family to a variety of different taste sensations. Mexican influence in our region has made ingredients accessible and when it comes to flavor, well, Mexico (you're not pronouncing the "x", are you?) is top notch.

So here comes the corn tortillas. My first wooing was finding them wrapped around warm fish with a creamy chipotle sauce. It may never get any better than that. But I'm discovering new ways to work them into my cooking repertoire and tonight was no exception. 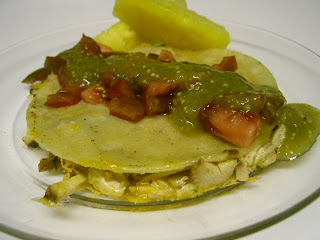 Here's my simple recipe:
Dice cooked chicken (mine was marinated in green chile and cumin sauce).
Then, add 1 t. olive oil to a small saute pan over medium heat.
Add your first corn tortilla and begin layering.
First, add your cubed chicken (the smaller the pieces the better).
Then top with shredded cheese of your choice.
Finally, top with another tortilla.
Cook for 4-5 minutes on the first side, then  carefully flip.
Cook for another 3-4 minutes on the second side and slide onto a serving plate.
Garnish with your favorite toppings (I used tomatillo salsa, brown tomatoes, and pineapple tonight. But you could add queso, sour cream, lettuce, mango or sauteed peppers and onions too.).

Like I said... simple. It's kind of a cross between a quesadilla and a tostada. You could fill and top it with just about anything you have on hand. The key to corn tortillas is to steam or fry them so they become my pliable and draw out the corn flavor.

What do you make with corn tortillas? Or if you don't use tortillas, share a super simple recipe that your family loves.