May 06, 2010
At about 4 o'clock yesterday afternoon, I was wishing I could just stay at home. Last week, I purchased tickets to the Littleton Public School's Lakeside Night and I was having buyers remorse.

I suddenly had visions that my night could be full of whining and crying because one sibling would want to go on this ride, but the other one would be too little. I imagined waiting in long lines, complaining about too much walking, and someone inevitably throwing a fit for more cotton candy. I was taking the kids by myself and furthermore was thoroughly unexcited about what I knew was going to be awful rush hour traffic.

Well, I can honestly say the only thing I was right about was the traffic. We had a more than fantastic time at Lakeside. So fantastic that I just had to write about it today! 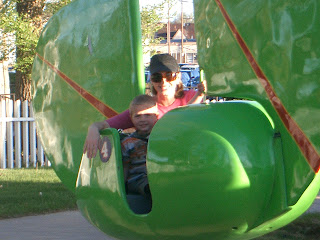 It was a beautiful night and the kids were ecstatic! We arrived just as things were getting started and quickly picked the airplane/boat ride first. Lakeside is so much more than an amusement park - it's really a piece of Colorado history. The park opened in 1908, and you can still see the towering "Tower of Jewels," ride the original miniature train around the lake (we saw birds on the water that you certainly won't find in your backyard), and the both beautiful and enormous Merry Go Round. The Cyclone Coaster is not only a landmark, but was also recently featured on the Discovery Channel as one of the top ten coasters in the US! 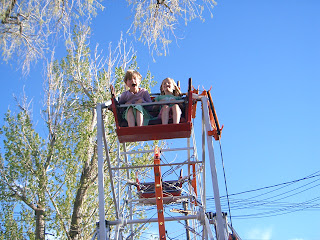 My kids were especially thrilled with the Tilt-a-Whirl, the Spider, Round-up (my daughter went twice - my stomach could barely handle this once), and the Matterhorn. My four-year-old was tall enough to ride on most of these by himself. The ferris wheel was delightful with it's incredible views (and it's surprisingly fast spin)!

We also managed to stop off at the funnel cake stand (my idea, not theirs). And I can say without a doubt this was the largest funnel cake I have even seen. It was nearly four inches thick and absolutely drenched in powdered sugar. I was in fried-food heaven. Crispy on the outside, warm and delicious on the inside. It was well worth the $4.25 and PLENTY for the three of us to share!

On our way out of the park, we hit the cotton candy stand and for $2.00 purchased a large bag of fresh cotton candy! Again, it was more than enough for the three of us and really, the epitome of all carnival fare. 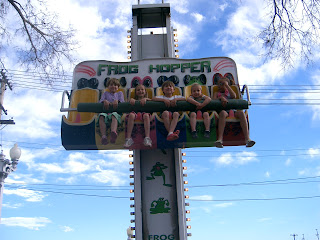 I know we have all kinds of "fancy" entertainment options here in Denver, but I have come to love Lakeside Amusement Park for it's style, affordability, and beauty. If you have never been, I hope you'll go and support this family-owned historic park! If you've been there lately, share with us what you love about Lakeside.