June 16, 2010
Ah, the salty smell of the ocean. It's like home to me. It's never been my home and likely never will be, so I'm sure my home in heaven will be a cottage by the ocean. I'm putting my request in now, God.

First Beach (just so happens there is Second Beach and Third Beach... B for originality, Washington) is the beginning of a stretch of wild coast that is the longest outside of Alaska. At low tide you can walkout to the key hole in one of the rocks jutting from the crashing waves. We didn't time our trip for this experience, but did find some beautiful shells and spotted a bald eagle perching on some driftwood. The high cliffs are magnificent and the rocks that rise from the ocean like a dagger to the sky are a stark phenomena.

Besides the "Jacob's Java" stand-alone coffee bar (Yes, another Twilight Saga reference. Not making this stuff up!), there was not much to do in LaPush. Cliff diving, anyone? (That's a freebie, Bella fans.) 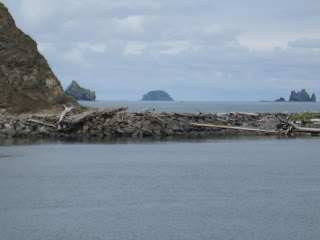 If you have eyes like a bald eagle, you may be able to spot the one just left of center in this photo. 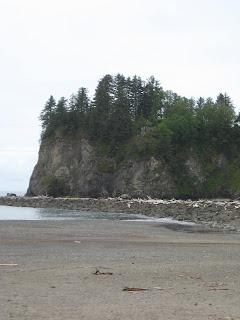 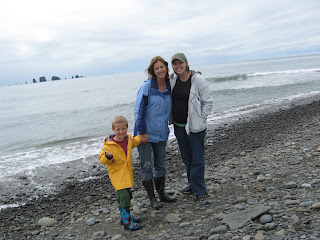 Are those rocks behind us in the ocean or a sea monster slithering through the waves?!? 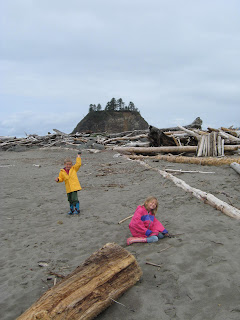 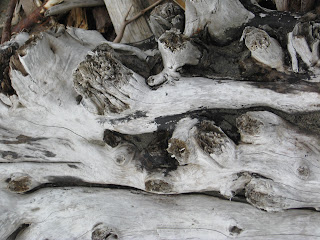 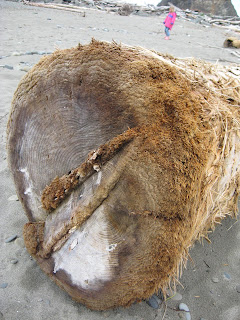 My sister-in-law and I thought this frayed driftwood was very cool. It was soft to the touch.
Imagine now that you are going to drive the entire width of the peninsula from west to east in order to catch a ferry to Whidbey Island. That's exactly what we did. The drive was just as beautiful leaving as it was coming and perhaps with even more rain. Later, I'm going to try to figure out how to combine the last pieces of our road trip before I start wrapping up this weeks posts by sharing with you some fun finds in rural Washington on the Puget Sound. I hope to tempt your taste buds with recipes inspired by the sea as well as the lush farmland that is surprisingly close to the coast! More surprises are in store - so check back later!