June 15, 2010
In many ways, Port Angeles is the hub of the Olympic Peninsula. The port is home to ships of all kinds, but for the tourist it is the gateway to Victoria, BC. From almost anywhere in town you'll find views of the Juan de Fuca strait that creates (or perhaps better stated, "contains") the US and Canadian border. 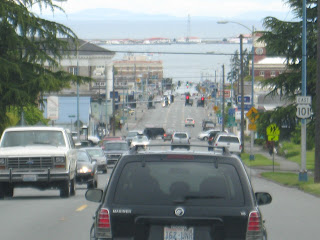 This photo captures one of the main thoroughfares of the city. Most of the roads have a distinct slope to them - most certainly a give-away of the Olympic mountains directly to the south. We spent some time taking in the strait that not only harbors ships, but also seals and plenty of water foul! Here are a few of my inadequate attempts to capture the highlights: 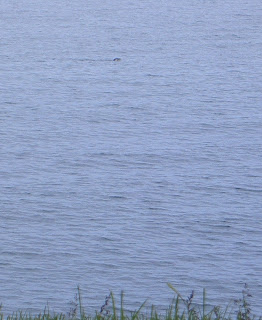 If you look really closely in the top third of the photo, you can see a seal's head.
(Like I said... inadequate.) 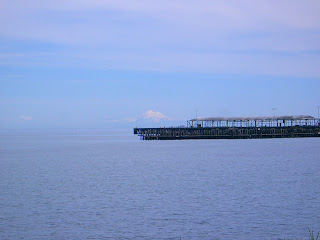 This is one of the piers jutting into the strait from Port Angeles. The real treat is the peak - I think it's Mount Baker - breaking through the cloudy skies.
As you are driving through town, you'll see signs for Olympic National Park and Hurricane Ridge. From Highway 101 to the park entrance, the drive becomes dense with trees - it takes just minutes! The vistas of Hurricane Ridge are just 45 minutes from town and worth every minute of the journey.
The clouds are slung low across the sky and make you feel like you are a million miles away from reality. Speaking of away from reality, I'm sure some of you are just dying to hear about the Twilight phenomena. This week will not disappoint. Case in point, this photo taken in Port Angeles: 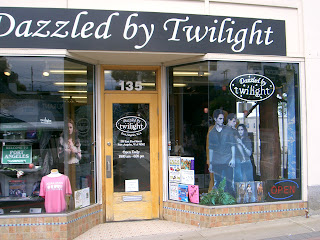 Yes, it is every bit as bad (or wonderful) as you can imagine. Which reminds me of one other travel tip: if you can't handle the fanaticism, don't plan this trip for at least another five years. More later. For now, on to Hurricane Ridge!

Thanks for taking the time to comment! Come back again soon.