July 20, 2010
For quite some time now (going on three years I think), I have banned myself from frequenting craft stores. I had formed a habit of not only browsing the aisles full of colorful craft supplies and trendy home decor items, but rationalizing that all those items in my cart were absolute necessities. With age comes wisdom, right?

Well, even if you don't call it wisdom, my fasting from craft stores has become a habit. So when I took my daughter on a frantic search for a new hermit shell crab (more on that in another post), I never would have thought I would end up in the craft store. Taking my daughter along may have been the beginning of the end... in hind sight of course. She was toting her adorable kitty purse complete with lip gloss, notepad and pen, mini dolls, and CASH. Her original plan was for purchasing a "party dress." I had gently nudged her far enough to secure a trip to the second-hand store and figured we could find something suitable for under ten dollars.

What I didn't expect was finding American Girl crafts in the interim. Some of you are shocked, even after my previous confession, that I didn't know about these AG crafts. I'm sure every mother whose daughter owns one of these delightful dolls knows about this line of craft supplies. I didn't. Let's move on.

You won't be surprised to know that we spent quite some time in this aisle of the store, and much decision-making took place. In the end, she came away with a new set of stamps, tons of stickers, and a make your own stuffed animal kit. It is adorable! The American Girl "Sew and Stuff Kit" comes with everything you need to make one animal for you and one for your doll. 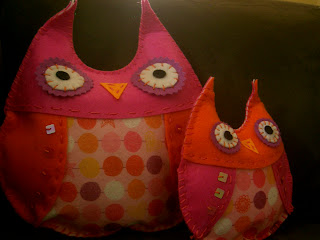 Aren't they just precious??
My daughter picked out the owl set and we completed it today. I would recommend this kit for children at least 6 years old. I still ended up doing two-thirds of the sewing, but she was able to help with every step along the way. We've only done a couple of other sewing projects in the past, and I think we are average in our craftiness. I imagine by 9 years old, she will be able to do an entire project like this on her own. Not that she would need to.

These are the kind of fun projects that make memories. I wouldn't trade these times for anything. And I'd like to suggest that these would be too cute in a range of colors! The fabric is felt and the thread is embroidery floss - very easy to replicate. Does that make you want to break out your craft bin or what?