August 30, 2010
I took my son to see the Denver Bronco's practice about a week and a half ago (practices are closed now). When we entered the practice area there was a man with a coaxing smile telling us there was a raffle going on that day. I naively walked over to the table where there was a Bronco's helmet signed by one of the players (if I remembered his name I would tell you... yes, I'm that good).

Naturally, my son wanted to sign up. I let him. Rather, I did it for him since I can't actually write more than this name. They told us we would receive a phone call if we were the winners. I turned to my son and said, "Okay! I put your name in the drawing. They will call on Tuesday if you win the helmet!" Add this to the list of things you should never say or do with your five-year-old son.

For days he asked me, "When are the Broncos going to call??" I tried to explain to him that, first of all, the "Broncos" would not be calling. And in fact, chances are the no one would be calling. There were hundreds of people trying to win the helmet and he probably wouldn't win. It went on like this for days.

Thankfully, Tuesday has come and gone and he thought nothing of it. Add this to the fact that prior to this I let him play one of those awful "claw" games at the arcade. You know, the ones where you put in a quarter and try to grab a prize (usually a stuffed animal) with the claw? His little world has been turned upside down.

You mean you don't get a prize every time you play an arcade game? You don't win when you put your name in a raffle??? Some lessons must be learned one way or another. It was a rough week for him. And for me. But at least he knows the Broncos won't be calling him anytime soon. :) 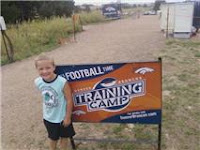